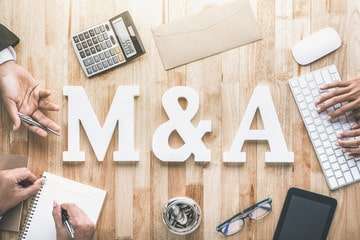 But what exactly are mergers and acquisitions and how do they help businesses?

Broadly speaking, an acquisition is either the purchase or division of a company. Some are paid in cash, stock, and can even be purchased using debt. This is known as a ‘leveraged buyout’.

Acquisitions are often carried out by a company in a similar line of business, who then use the purchased business to benefit their own. This can be either by using the acquired business’ brand, or purely to control more of the marketplace. On the flip side, some acquisitions can be done in opposing fields to diversify their offering. By nature, acquisitions can be friendly, or unfriendly (otherwise known as a hostile takeover).

Whilst similar by nature, mergers differ slightly form of acquisition. By definition, a merger is ‘the joining together of two separate companies or organizations so that they become one.

Simply speaking, a merger is a purchase deal where both CEOs agree that joining together is within the best interest of both companies.

Why is it important to work with experts in mergers and acquisitions?

Due to the complex nature of M&As, they can be a risky strategy – especially if companies lack market dynamics and vision of the local business environment. To be successful, the merger or acquisition needs to be strategic, effective, and focused. To build up this expertise takes years of practice, so it’s always best to reach out to leaders in the field for the best chance of success.

From deciding on your strategy, to funds, to due diligence, to even considering factors such as the office culture – there is a lot that could go wrong if you choose to take on the risk yourself.

So what are the benefits of mergers and acquisitions?

For those brave enough (under the right guidance), M&As have many benefits. We’ve rounded up our top 5 reasons to consider a merger and acquisition below.

Mergers and acquisitions can be hugely beneficial when done correctly. If you’re willing to take the risk, make sure to hire a professional to reduce the possibility of things going wrong.

How Restaurant Knife Sharpening Services Are Beneficial For Your Business