HomeGaming7 Tips on Playing Mobile Games for Beginners in 2021
Gaming

7 Tips on Playing Mobile Games for Beginners in 2021 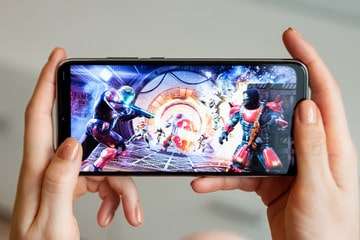 If you’re a newer gamer, you might be surprised to learn that the gaming community shunned mobile gamers for many years. They said playing mobile games didn’t count as “real gaming” because the games weren’t as serious as games on PC and consoles.

It’s true that most mobile games at the time were casual, not like the time-intensive first-person shooters and adventure games traditional gamers played. Yet, although the skills needed may be different, it still takes a lot of practice to excel in a bubble popping game.

Sexism was a hidden motivation behind a lot of the backlash. People associated mobile games with female players, while the classic PC or console gamer figure was male.

While there are still equity issues in gaming, the general modern consensus is that playing mobile games is the norm for everyone. The variety of mobile games available grew at a rapid pace throughout the 2010s and into the start of the 2020s.

We now expect mobile game features that weren’t imaginable in the early 2010s. If you want to play an action and adventure game with high-quality graphics on your phone, you can. It’s as easy to play massively multiplayer online role-playing games (MMORPGs) on a phone as it is to play a game of solitaire.

As the mobile game market grows, it’s hard to keep up with all the new options out there. Even long-time mobile gamers might not know some lesser-known mobile gaming tips. Here’s a list of tips for playing games on phones that’s perfect for newbies and pros alike.

Mobile gaming is profitable as the industry keeps growing. Developers make money from free mobile games by ads on their apps. Another is offering add-ons, powerups, and mobile cheat codes to paying players.

Mobile advertisers study which features and game mechanics get people to buy things. When a boss battle requires tapping for what feels like forever, it’s tempting to pay $2.99 for an “auto-tap” powerup. It’s cheap enough, right?

Sure it is, but those little purchases add up fast. If you get too into a game and start buying every powerup possible to beat levels and keep playing, you might give into temptation. You could spend hundreds or even thousands of dollars if you’re not careful.

Keep spending to a minimum: Don’t pay unless the benefit matters a lot to you and is hard to earn in the game. If you want to be less stingy but still careful, try making a budget for each week.

You could decide that you won’t spend more than $1.99 per mobile game per week. Or, you could adjust the limits based on what’s happening in the games. If there was a special tournament in one game, you could spend $1.99 most weeks but decide to spend up to $3.99 that week.

With a reasonable budget, even the most intense gamers can keep the hobby affordable and spend responsible amounts.

This tactic doesn’t mean you have to give up powerups. Many games allow you to earn most of their powerups during gameplay.

Limiting spending on powerups and the like is a chance for you to perfect your skills and win more levels without those advantages. As you get better at the game, you’ll find you beat levels and earn those coveted powerups faster.

There’s no bigger downer in mobile gaming than when your battery dies while you’re playing. It’s annoying to have to stop and charge your phone, but that’s one of quite a few reasons you don’t want to let that happen.

As far as the phone itself goes, letting your battery die is bad for battery life going forward. Another problem when battery saver mode switches on is that gaming rewards programs like Mistplay and Rewarded Play don’t work.

Within the game, the battery running low messes with performance. Graphics quality goes down and the game might lag. These problems are sometimes no more than an annoyance.

Other times, the issues could cost you or your team a win. If you paid for a game or for powerups, you might lose them and waste that money when your battery dies. You might lose your place in a competition or on the leaderboards.

Given all of these issues, keeping an eye on your phone’s battery life is vital. Some people recommend starting with your phone at 100%.

If you can’t leave your game for some time or you’re playing a battery-intensive game, that’s a good rule. Otherwise, you might consider charging your phone at 80 or even 50%. The most important thing is to keep your phone from going into battery saver mode because that’s where the biggest problems start popping up.

You can keep playing most games while your phone is charging. A long power cord or a wireless charging platform that you can hold is a good solution if you’re gaming from home. When you’re on the go, consider a case with an integrated battery.

3. Is Your Internet up to Snuff for Playing Mobile Games?

Saying that mobile games these days are as varied and complex as PC and console games seem like 100% good news. While that’s awesome news indeed for the gaming industry and gamers everywhere, it does come with some tradeoffs.

One is that new and improved games drain battery life faster than you might expect. Another is that many popular mobile games with impressive graphics require speedy internet that doesn’t drop.

If you live in an apartment where ten 2.4GHz WiFi networks and other devices all interfere with one another, you might not want to use your own 2.4GHz connection. If you have internet issues when playing mobile games, consider switching to unlimited mobile data, 5GHz internet, or finding another place or time to play.

4. Protect Your Posture While Mobile Gaming

If you play video games or know anyone who does, you’ve seen fancy gaming chairs and electronic gear. These accessories aren’t usually marketed to mobile gamers. Yet, your posture is also at risk when playing mobile games.

If you’re walking around while playing, you may be hunched over and straining your neck. If you’re sitting on the couch, in your bed, or in a chair, chances are that your back isn’t well-supported.

The good news is that all kinds of affordable tools exist to solve these problems. If you’re sitting, a coccyx cushion or another supportive pillow goes a long way for preventing aches and pains.

If you’re standing with a mobile phone, try some simple posture exercises every once in a while. You’ll find these changes are as effective as they are easy.

If you’re a dedicated gamer and find yourself missing some of the best console video game graphics on your phone, Android has the fix for you.

Your phone’s Developer Options are a set of tools that let you tweak many settings and operations. Do some research before trying these semi-hidden options so you don’t make a change you regret and have trouble changing back.

Another thing to consider about Developer Options is that they take up extra processing power and battery charge. If you’re playing a game that already demands a lot of your phone, consider whether using these options could cause your phone to crash.

6. Custom ROMS and Kernels Are Another Expert Option

Kernels transmit messages between applications and the phone itself. On Android phones, you can replace the standard kernel with a custom one. If done the right way, it could make your phone run faster and/or improve battery life, among other benefits.

Trust that this option is for the real experts. If you get these modifications wrong, your phone might be “bricked.” That means it won’t turn on again ever.

7. Your Phone Needs to Stay Cool Like a Computer or Console

All gamers know the angry whirr of a computer or console fan after playing for hours at a time. A hot phone isn’t always that noticeable, but playing phone games for hours heats your phone up in the same way.

There are a few solutions to the dilemma. First, close apps you’re not using instead of running them in the background. Prune any unused apps from your phone to clear up memory, too.

Turning the brightness down is another way to help your phone stay cool. If it’s hot out or your phone is struggling for another reason, you might also consider sacrificing graphics quality.

Turn off other phone features you’re not using while you’re playing. For example, shut off Bluetooth and even stop cellphone service by turning on airplane mode.

Some phone accessory makers offer phone cases with built-in cooling mechanisms and mobile phone stands with fans. Buying one could be a good investment if you live somewhere hot or like to play for a long time on high settings.

Unexpected and Interesting Information of All Sorts

Making the most of your time is key to mental wellness during difficult times. These tips on playing mobile games are sure to improve your on-the-go gaming experience.

The advice doesn’t stop here: Check out other articles on this site for more interesting facts and tips to help you better enjoy the rest of your life.

Who Is Katie Sakov? What are some of Katie Sakov’s most popular works?

What are the Best Electric Cars on the Market?